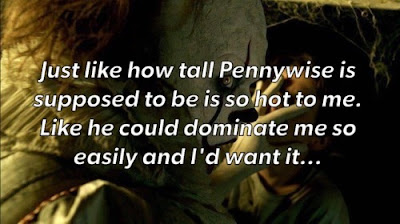 a story just appeared on Konbini about people fantasizing about Penny Wise from the latest IT re-imagining. the story and clips/quotes/image memes is here.

personally the entire clown thing freaks me out and still does - but there's a hokey low budget film called 'Killer Clowns From Outer Space' and one scene stuck with me an began obsessing over it. have you seen it? can you guess what it was?


its not in the clip btw.

it wasn't till last few years when i've seen photo's from fetish events that i discovered both vac beds and the opposite were possible. second life makes it easy peasy of course.

so finding an 'in' that appeals to my fetish and i then found out there on the net - some rubber fetish cute latex clown transformation stories.... please post any links as i've misplaced them. 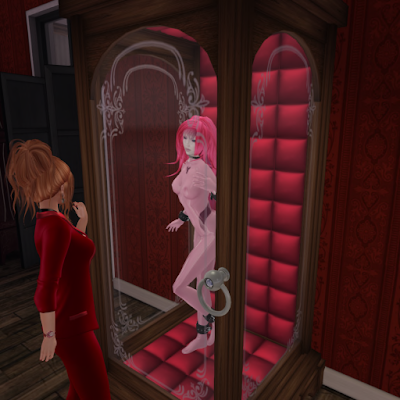 and another permanent state of dollification, automation in world. 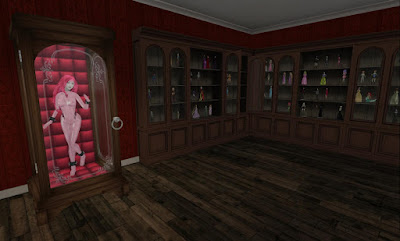 no longer on display at the shadow box in Estate Obscure. now a part of a doll collection in her world. new rlvs in place. lovely display case.

possibilities to follow along with reader sourced solutions needed. more when awake

xx
Posted by Asudem Latex at 6:19 AM No comments: 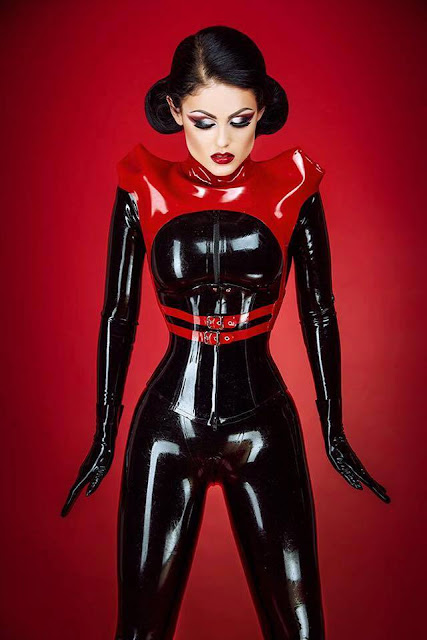 looking down at my sleeping body, 'we've come to take you away from all this and into our world of latex' - 'Yes please' i answer with no hesitation.

maybe i need it blown up as a poster for my wall...

xx
Posted by Asudem Latex at 6:16 AM No comments: 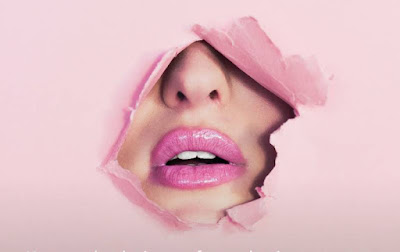 Posted by Asudem Latex at 6:13 AM No comments:

what body perfectly shined in this photo. 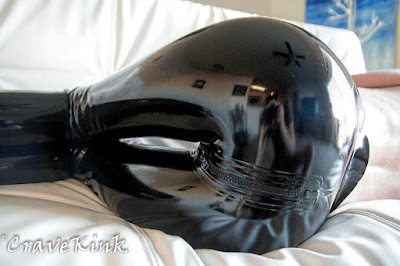 care to have a guess?

xx
Posted by Asudem Latex at 6:12 AM No comments: 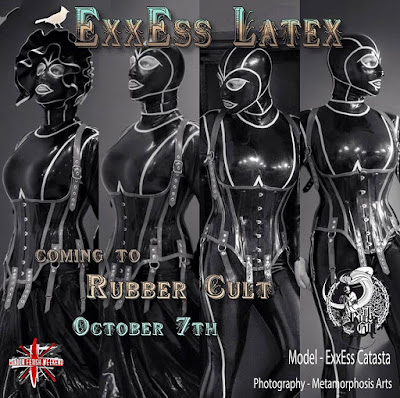 since the temperatures have cooled down, it seems fall is the latex season in northern Europe.

do they go to southern hemisphere in the Spring?

meet her at a Europen art fair!!! 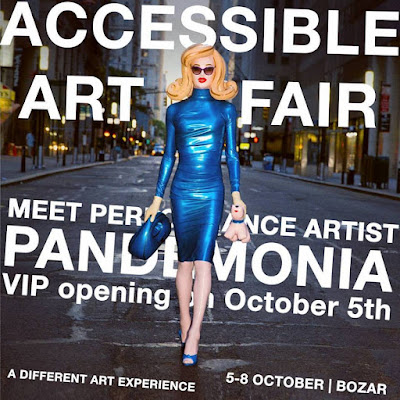 i wonder if she does merch / posters?

not a fan of the personality 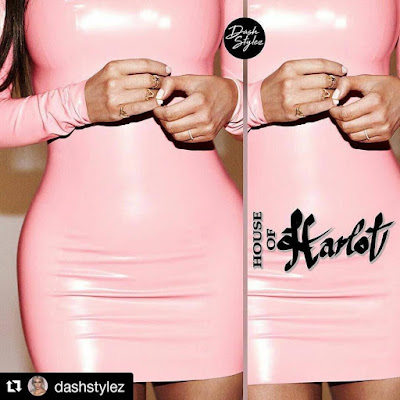 though she does fill it well and certianly going to expose a lot of us colonials for latex.

guess who it is yet?

#kimkardashian for Allure Magazine in September 2017. Kim wore a latex dress by House of Harlot with rings custom made by the stylist (except the ring on her left ring finger) 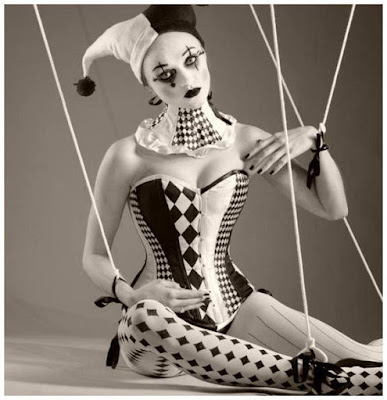 so what and where are you getting items from? specialist shops or bulk online stores?

xx
Posted by Asudem Latex at 10:52 AM No comments:

The latex designer who finds power and peace in her clothing 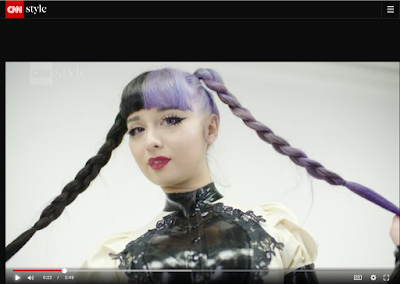 as reported on CNN in italy.   full text and video is here

xx
Posted by Asudem Latex at 10:49 AM No comments:

she must be all latex 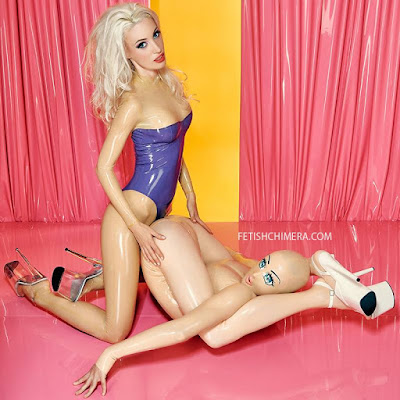 another great shot from Fetish Chimera.

xx
Posted by Asudem Latex at 3:54 AM No comments:

a vac bed made for two 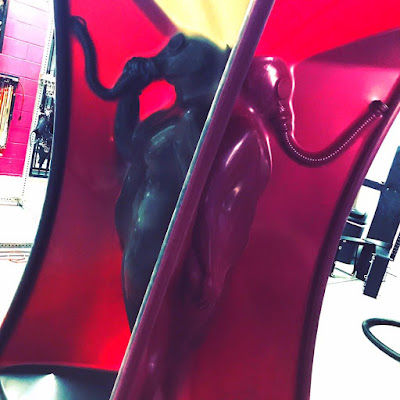 its coming close to my doll display box in structure at lease. the front panel would be a clear and thin latex and the sides / back be heavier and less flexible.

does this exist already? if so please post link in comments.

xx
Posted by Asudem Latex at 3:52 AM No comments:

latex woman is a fixture at London Fashion Week.


and a more info on her here 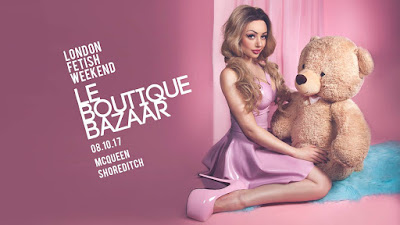 xx
Posted by Asudem Latex at 9:51 AM No comments:

by a regular contributor in the UK. and no he's still not done the Doc Vanderlay mask fashion shoot with my head as promised. although apparently he does now have a new dlsr to shoot with.

if the Rubber Sisters would reply (he's shot and filmed them) he said he'd mail it onwards for my guest appearance in their productions. 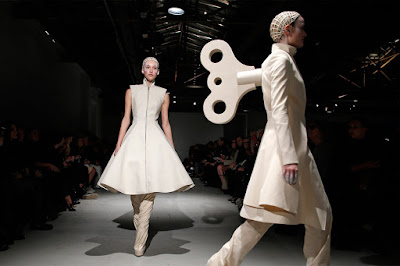 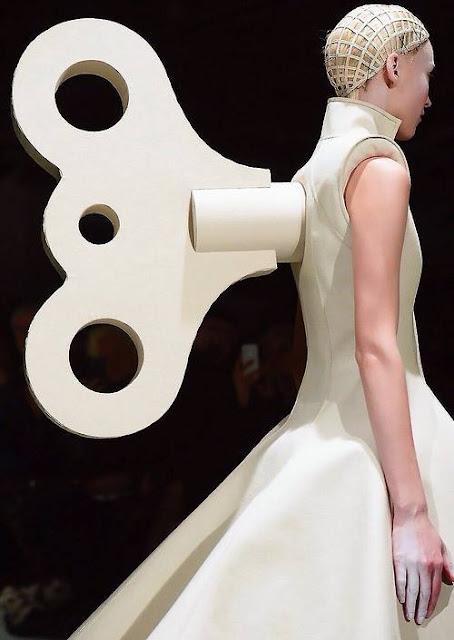 on the to-do pile 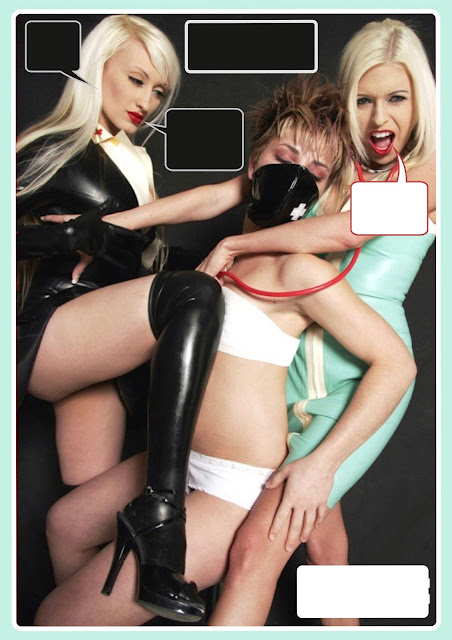 but feel free to jump in and do your own - just share the results.

Posted by Asudem Latex at 8:47 AM No comments:

for my own amusement

i collect images etc for the blog but sometimes they inspire me even though the text is way off what i'd want or gender etc etc.

so i delete the text, and in a basic notepad i work up my own stories from the image that inspires me. i generally start by copying the source text so i have it then start revising and editing it.

this is the latest once i am working on - image captures so much.

if anyone knows the models or sources and rest of the sequence the please let me know and share. 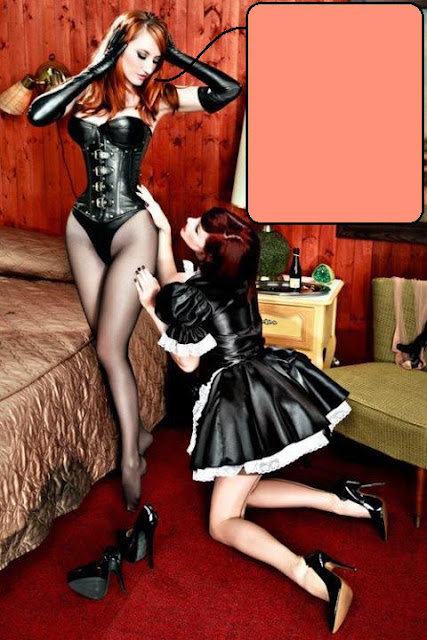 You see I’ve always made the dolls for wealthy clients and of course they weren’t volunteers. That limited what I could do because of this small ‘hindrance’. Oh they looked great and acted perfectly as you do already but they lack a personal artistic touch, a realisation of my desires and their burning need for _Me_ above all else. This final element means all conditions, limits are simply - gone. Their acts of submission were programmed and automatic and while yours are, they are so enhanced; you wanted this. They were simply make overs with conditioning versus a full structural rebuild of a house and all new appliances… So shiny and new. Litterally shiny as well (giggles)

With your burning need to please me, to be with me as my lover and your secret and very pronounced latex fetish combined and my own deep admiration of what you’ve become and will become.

Oh I can take you so much further… so many possibilities to explore. All of the permanent and of increasing …. artificialness. Perhaps further shaping and cutting to make you a perfect dolled duplicate of your Mistress. Who better to serve and please me than me? "