soon to be a rubber sister?

as some of you may or may not know i don't sell advertising space for money, rather i trade it for products from the designer or store and i also limit any advertiser to one only so they get associated totally with the site and not get lost in a flurry of small boxes. if your interested to email me.

anyway i did have a add for Mask's by Kerry who graciously sent me a new Emerald mask after the alloted booked time was finished. see bellow.i thought it was the most dollish and the original size was a good fit for my head. 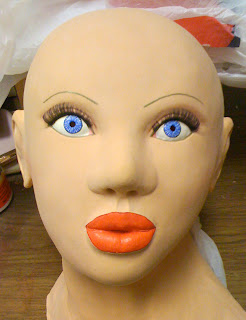 i know for a fact that the first masks used by the The Rubber Sisters are in fact from Kerry so that was a start. the Rubber Sisters just spent a long time getting the make-up done well and I would do the same thing too. i didn't want to look like all the other dolls and Miss Britne already rocks the look and even has multiples.

so i found a spfx make-up artist and prop builder and we're too-ing and fro-ing over styles and looks at the moment like eye details and whatnot. she's working up some more sketches now and i think i'll have the completed mask back in january sometime.

now i've never had a mask before let alone one that was actually made to fit my head and its a very curious and sensuous feeling putting it on and then lacing it tight...

you know that yummy feeling of a new pair of boots being pulled on and laced tightly on? or a corset even? you just want to keep tightening the laces, more and more till the garment becomes so tight it becomes like part of an armoured shell fused to you...

so knowing that i'll have a mask soon i though i'd send the Rubber Sisters another email and point out all the coverage they've had in the blog. not sure if they were ever regular readers so i was very happy to hear back that i have appeared to have introduced them to Second Life, that they think the blog is 'Fantastic' and are interested in having me as a doll model for photo shoots.

i think i need a unique and rare lock for the mask....

i had so many plans... all gone xmas morning when i woke up with a vile cold which is still with me.

slowly getting over it and that explains the lack of updates on a period of time i a lotted for lots of cool new entries.

heads still mush and still icky, updates will come as and when.

i remembered the scene

though i think the song really bugged me for some reason and didn't fit the tf motif imho.

here it is for you to decide and enjoy. 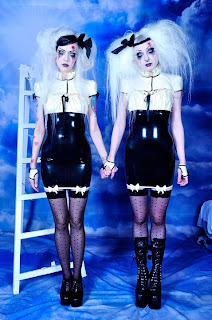 were spotted at TG Halloweens event in London. i just found out.

xx
Posted by Asudem Latex at 10:27 AM No comments: 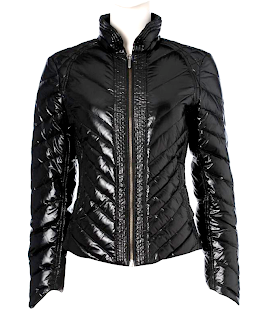 one thing i've been wondering about for some time is how to take this latex addiction more into mainstream and one thought was a very stylish and modern puffa coat / jacket made from latex.

here's a few i like the style of from various ebay searches that i think would translate very well and still have a bit of a fetish edge too them. 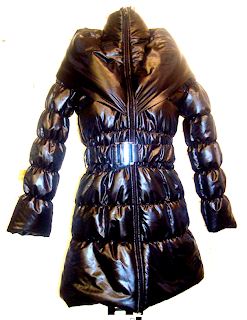 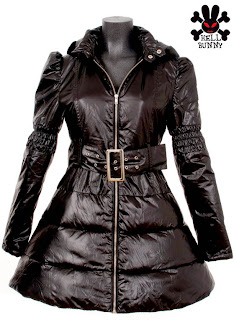 as you may have already noted over on 3XL's excellent latex blog that a NYC designer Patrik Ervell has made forays into this area with his latex hooded rain jack which is described in more detail by 3XL here.
go read the article. when your back you should be suitably aghast.

are we starting to see a trend with expensive designers nipping into latex realms and ramping up prices to insane levels? Gucci latex catsuits for thousands?

just in time for Xmas...

and can be found here and here.

i'm not being mysterious, the poster of the video clips have disabled embedding.

yes this is an actual fetish...

although i'm not sure if he or she would ever let them out of the original packaging.

i am still trying to find the Esprit rubber sneakers they did a few years ago. all real rubber in a high top design. sometimes they do crop up on ebay btw.

xx
Posted by Asudem Latex at 12:00 PM No comments:

which reminds me of the vampire delimema - which is of course no one knows your pretend to be a vampire unless your walking around with your mouth open. for anime eyes you need your eyelids closed to see the entire effect.

now if you were anime eyed doll and vampire you'd look very silly, mouth open and eyes closed. probably bump into a lot of things and swallow others..

i couldn't believe it.

anyone guess what it is?

they are so so thick

i finally got myself over to the nearest American Apparel store in search of their Disco Pants (with money to hand no less ready to statisfy my tight and shiny needs in a public stor no less) and besides noticing the only ones in stock are a size S, was the thickness of the material they're made from. 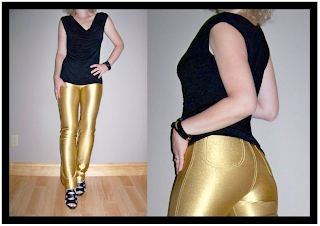 if you not read the comments about them from AA's own site as linked to in the first post you'll be surprised as how thick they are. like 2 - 3mm thick and absolutely no hanger appeal either. they looked so drab.

so standing there torn about buying them i just walked out. i am still very much deciding to get them or not. still they look great in bright light of the summer where as latex simply does not and of course is too hot to wear.

or maybe i should just the same pattern in a much thicker latex than i'm used too is the way to go and of course keep scouring ebay and get them on sale.

i heard this on the radio first as well its remix - and thought to myself this so has to be the foundation of a dazzling hypno video.

this is the club remix. have a listen.

when i tracked down the actual video here i was totally surprised what the end result was. sadly.

still it leaves open the possibility of remaking it using all the imagery we want to see which will undoubtedly fit the lyrics a lot better.

xx
Posted by Asudem Latex at 8:23 AM No comments: 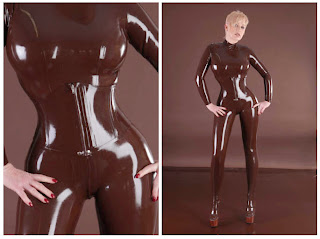 part of Simon O's ebay clear out here. their listings end in about 5 days or so.

i just had an email from Slinky Skin with the bellow christmas card! 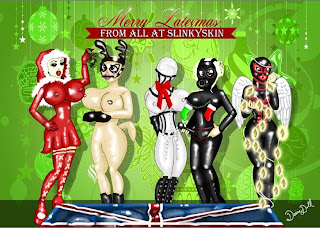 and it also announced a 25% in latex until the end of Dec 2010 so that you can use any christmas money from your relatives on something other than a wool sweater.

xx
Posted by Asudem Latex at 8:02 AM No comments:

latex encasement for all for free! 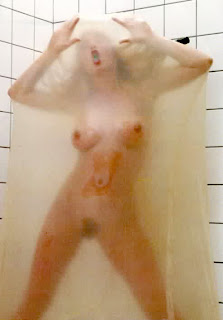 well not actual latex encasement - but next best thing; hypnotic trance induction to be trapped in a latex balloon that sucks closed with you in its tight latex grip.

it can be found on Lee Allure's site and download directly here. have a go: i know you desperately want too. please report back in comments how it was.

after trying it myself i sent her an email of encouragement and a conversation rapidly developed. i then sent her some of my notes on hypnosis interest from the blog, specifically my wish list as detailed in Hypno Master D Explains what's possible and trials of my own bespoke script.


"There are certainly some interesting ideas there, and since that
audio came out, I've been having other interesting conversations
with people about latex and what they did with it. I need to let
it percolate in my head a little bit more until it fits the rhythms
of what I do, and see what happens. "

so hopefully she'll be experimenting further with latex hypno fetishism. i might have to make sure she gets a pair of real latex leggings sometime soon and convert her even further.

some days you just wish you could time travel shop...

does anyone do retro 50's under garments? i think House of Harlot is known for latex versions. these are pretty well Barbie's breasts. 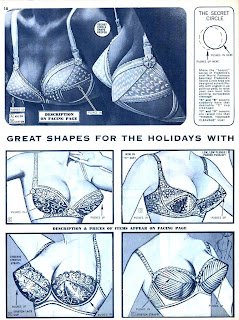 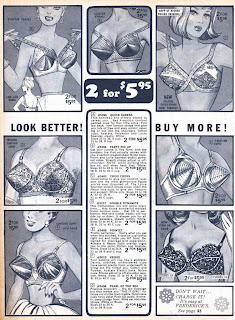 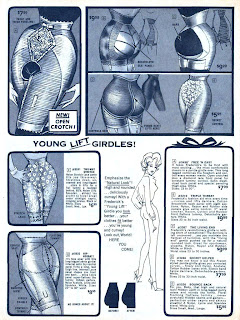 and something floaty to wear on top. 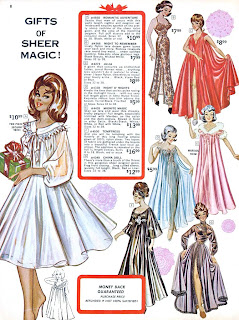 the next trend after the ongoing corset boom?

dosed with the mannequin making juice 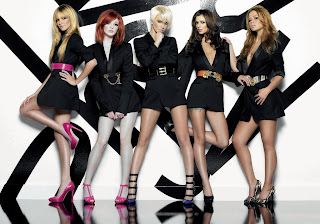 she's not hard to spot; is she really that white?

still fashionable - according to the Daily Mail (again) 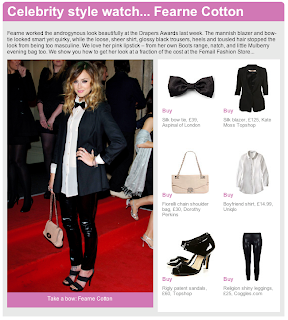 ok, no comments please. we know its a tabloid and as journalistically credible as the softest of afternoon tv interviews.

still the same photo has been up for some time. whomever this fearne cotton is? surely a made up name? very cute look though. 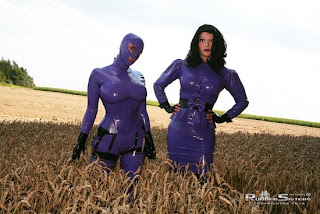 this new came to me in their Newsletter No. 04/10 Sunday, November 7, 2010 and i apologise for not posting it sooner. well its been 5 years now since they became the The Rubber Sisters - the best rubber dolls out there in my expert opinion.

they're regulars at the various fetish events in Europe and appear in Heavy Rubber as well: 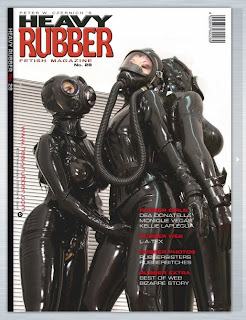 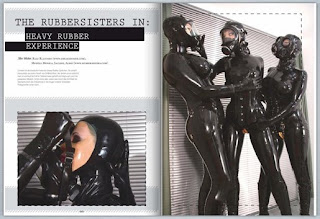 the news that caught my eye was just a little bit of text at the bottom of the newsletter that reads:

Please let us know, if you are an authentic fetishist who loves rubber, transformation and like to shoot adult content (acting in front of a camera). We are interested in good looking girls (subs, slaves, switchers, sluts or domes) or slim attractive and good looking guys (switcher, rubberdolls, T-girls, TV´s) or couples.

it sounds like a siren call too me... of course i've just emailed them and asked them....

EGL how to video from start to finish

note her eyes have been video effected so to appear much larger.

i like the contacts from the earlier post on makeup as they have much more of a luminous fake doll like style too them. thats an element i will be specifying with the special effects make up artist who is going to transform my new Emerald mask from Kerry's Female Masks. although there are some possible directions i can go with it. i've always had the idea of being able to wear my Second Life identity in the real world, though the shape of head on Emerald isn't the same nor are the lips.

i have several ideas for it and will need to take some advise from the stylist before she starts. one element i am seriously considering is having close ups of my eyes shot, then she can use my actual eyes as eyes on the mask but 'enhanced' to be super luminous like the aforementioned video and doll/mannequin like. the two mannequin heads i own look really good as they eyes are pretty well photographic.

if they can make a light cycle....

the Tron costumes will be much easier. i bet they'll be available for next halloween. i mean Avatar's characters were.

full article and price can be found at WIRED here. now will a latex designer make a more fetishized version of the Tron Legacy costumes first i wonder?

is there a plot?

do let me know as i'd really like to know. 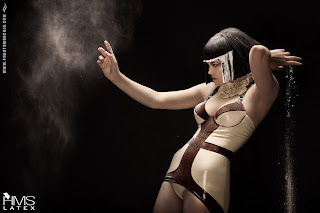 click images to enlarge
thanks Sophie from HMS Latex in Paris for sending these great shots in which drag latex designs out of the black catsuit only corner into haute couture arena. which is odd as the rest the world is still buying of latex like leggings en masse at costs that are greater than real latex leggings. guess Sophie is just avant garde.

oh and yes some latex designers do read this blog - just the really good ones. ;-) 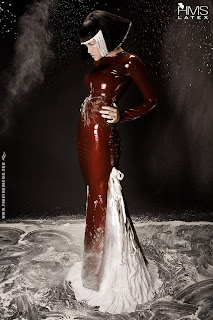 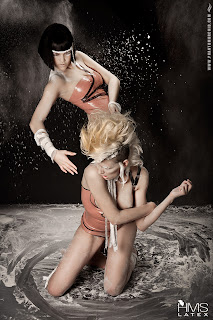 Posted by Asudem Latex at 10:33 AM No comments:

i can see a a full series of these 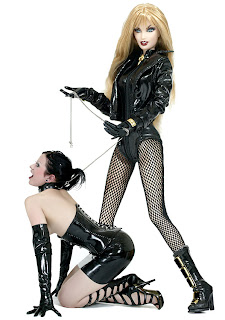 maybe with dolls, maybe barbies or even life sized mannequins.

any creative types out there would like to take up the challenge?