the Rubber Sisters in 3d?

my UK correspondent who also contributes to Skin Two magazine and shoots at Torture Garden spent a day filming the The Rubber Sisters in Brighton in a fancy hotel used by politicians for their annual conferences as well along the seaside in Brighton and a final long scenes in a Hove dungeon (apparently that where they all are).

here's a proof he sent me and he also added he's meeting with the two local dommes in the film to nail down ideas to turn the scenes into a full short film. with a plot and everything! 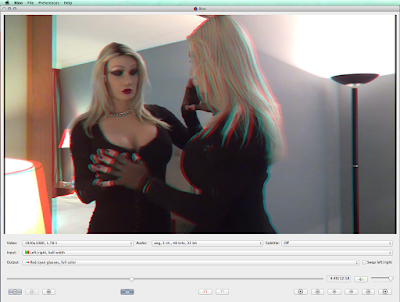 waiting on more news. if you have a pair of old fashioned red/cyan glasses then you can see this frame in 3d.

now could the kind sponsor of my mask from Doc Vanderlay please arrange to post it to him so i can appear in the film by proxy? maybe i should just have my Second Life avatar head mailed around the world to appear in fetish films? Emma Lee???

Unknown said...
This comment has been removed by a blog administrator.
1:00 AM