here i am, encased and soon to become art 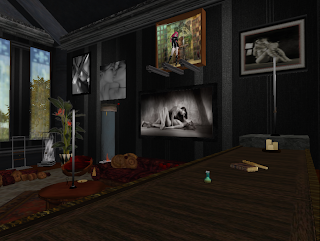 yes!! i finally heard from the maker of the Shadow Box display system that i previously reported on several occasions which i spotted on the SL Fetish Fashion Blogspot.

it was all a weird co-incidence. i was posing in my doll display case in Stones and Rubber then the area collapsed and was rebooted into some newbie space when i heard from the designer. after chatting to her a bit and discovering she's working on several new models based on suggestions from customers, she tp'd me over to see them for real.

i have loads of ideas on how to customize it for my own particular tastes. one of which relates a favorite fetish story 'a bottle of lesbians'. she took me to a working on and i'm still here now. no idea where here is - though i'll stay until told otherwise. 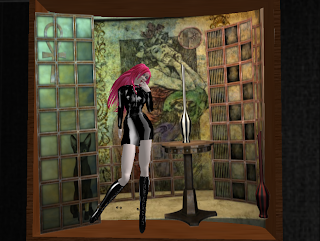 Let me be the first to say congratulations! I love your current look and can tell from the post how excited you are.

Please let us know where your display ends up being setup. You deserve to be viewed by the community and soak up the adulation.

Again congrats on finding yourself :)

can anyone tell me where i am. there was another region restart and i was bounced into newbie land and i need back into the shadowbox.

just go there and send me a tp request. a landmark would be handy too.