a reader who i didn't know was a reader just released this on their DA page. 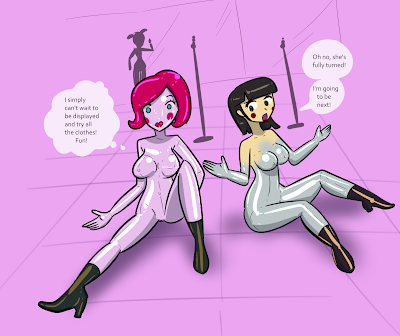 While window shopping in a nondescript shoe store, the shopkeeper approached two customers Xafina and AsudemLatex . "Would you ladies be interested in 80% discounts of any items? In return, you have to model the item you have bought afterwards." They nodded in unison. "I like these boots, was considering to buy them on the next payday. But since we're talking 80%..." Xafina said as she signed an agreement on the cashier's counter. Asudem has already slipped her own choice of boots on, and her agreement was signed just moments after she paid for her new footwear. "Alright then!" the shopkeeper clasps her hands. "Let the modeling begin." Instantly, they felt warm sensations course through their bodies...

Xafina and Asudem did not move a muscle as they were now frozen as mannequins. Their clothes were removed, supposedly not to take away any attention from the modeled footwear. To add insult to the injury, the promotion was a month-long one.

her page is here on deviant art.  and its the second page by an known artist so this is where all the weirder items go.