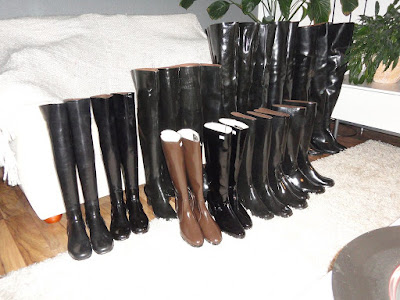 back in the 60's there was a fetish rubber magazine from the UK called Atomage and it was mainly latex raincoats and such but they did feature these amazing soft rubber boots from Sweden called Acquo. i huge fan collection is above thanks to google. 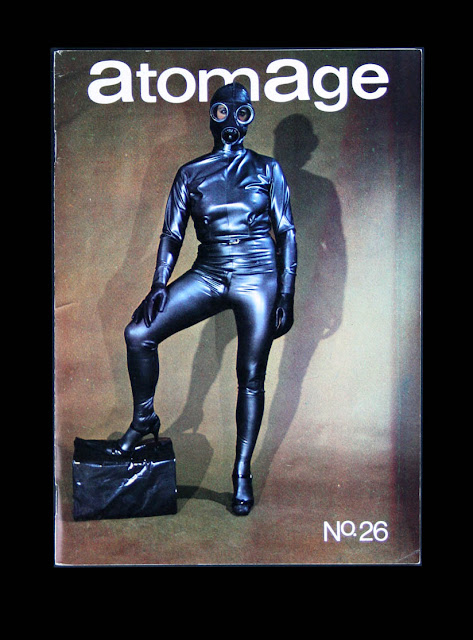 they came as standard flat soled knee high, then with block heel then they got taller and taller. these are your heavy duty wellies - these were very soft rubber that would fall down. they became very collectable in the 60's and 70's and very hard to find.

in the early 2000 something Sigerson Morrison made very similar versions with brogue type detailing in a range of bright primary colours - as well as black of course. i did manage to track them down end of stock from their shops and wore two pair to the point of falling appart.

now there's a new company in Sweden remaking them and a 2nd newer generation have been made that are even more rubbery and glossy.

their home page is acquoofsweden.com and tell them you saw them here. they're very expensive but they do have a 'factory' outlet store on their website here. where the boots are 50% off due to slight manufacturing errors. as no one will be examining them or licking them i don't care - i just want to wear them.

so after careful measuring and considering what i've been going through of late - i'll order a pair of Valencia with the flat sole so it easier to pass in daylight hrs as normal shoes/boots. i'll likely to wear them all the time under slacks etc as i did to the Sigerson Morrison.  btw - sometimes they appear on ebay.com - and there's a red sized nine ones right now here.

they are also generating a lot of new photo's - fashion oriented but it seems the latex fetish underground has missed their reappearance and simply not aware of their new availability. the photo's are strickly normal catalog shots vs the 60's versisons appearing in Atomage. 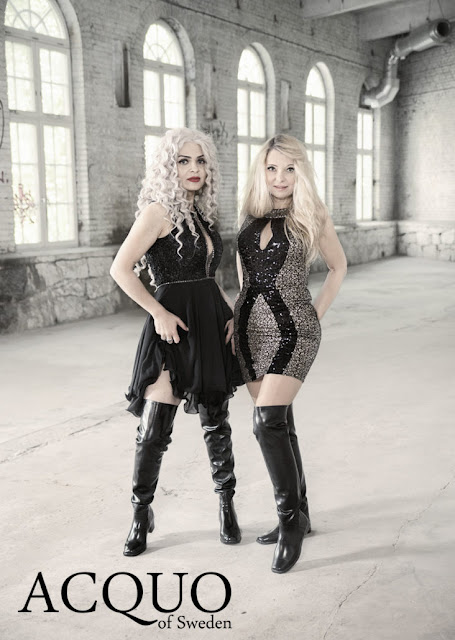 i'm surprised they've not started to be big in France as riding boots are worn in Paris as daywear and tall thigh boots are well known (also where i've looked on ebay.fr for them - bottes cuissardes)

do you own original or have the new ones? please post in comments.