full of story ideas and some even written 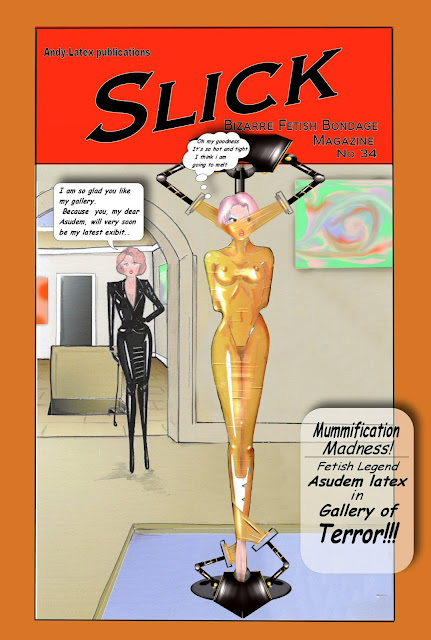 i've been following Andy at Smooth Slickn Shiny for some time now and exchanged emails and ideas. he was kind enough to illustrate a couple of his mock magazine covers and feature me in the past! one is bellow. do visit his blog. 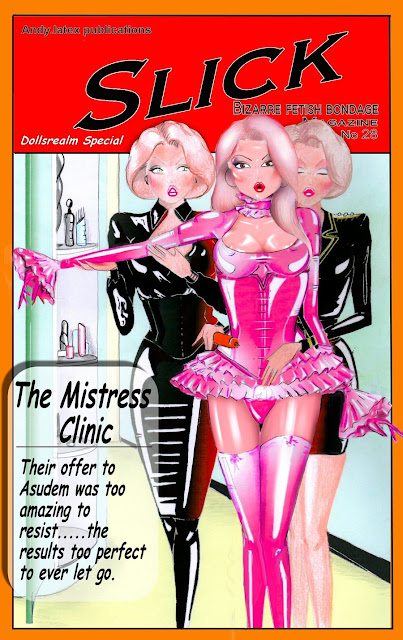 now following his world narrative i came up with a plot device and reason to slip into it. i've shared and so far to tied up to render it as a drawing - so here's the draft for you to enjoy.

Aunt Jane let andy out loose in the mall to window shop for an hr a day and every day like clockwork, andy is very self confident over this all over latex restricted look so hides out in a coffee shop at then end of the mall but is spotted by an intrigued Asudem passing by and a friendship forms and loads of admiration and compliments on andys look and clothes/heels etc - even jealousy is eventually revealed. Their morning coffee continues for weeks and Andy is getting used to walking through the mall and looks forward to their quiet discussions. However Andy tries to warn her off delving to deep ‘its dangerous - these women are fanatical’.  With the comfort of someone else wearing latex in public, by the second week Asudem wears a pair of light pink tights and shows them to Andy. If it wasn’t for the tell tale gloss no one would notice. A week passes and Asudem is still publicly wearing them daily now. She then starts to wear her latex blouse as confidence increases thanks to Andy as a role model. The first time Asudem arrives Andy remarks - I can smell your warm latex before I saw you….

In awe of Andy finesse in her heels, she starts to wearing higher heels. Andy explained guilty ‘you shouldn’t be wearing them all the time, they have me in these killer hells so long now I can’t wear anything else!!!! - I am crippled without them. My feet now have a permanent high arch I can’t flatten lower than 5 inches. Its like all these clothes and shoes are moulding me into something else and so so far from what I used to be. So embarrassing - Aunt Jane is relentless and I suspect her circle of friends are far worse’ - ‘would you believe some of them are black shiny coated latex nuns in a private covent’?

Asudem’s eyes are wide as saucers as this element of Andy’s fashion is revealed.

Asudem continues an asks questions like - who are the designers? how long do you wear it. Andy enjoys the friendship but is trying to warn Asudem off of digging to deep.

Unaware to both of them they are being monitored by the Aunt Jane and her sisterhood as the weeks pass and their friendship grows. They note Asudem’s self outing and her relentless interest in Andy. Each week Asudems confidence shows more and more latex.

After a month or so Asudem doesn't join for tea/coffee but Andy finds her in the clutches of x,y z who then explains his 'your time in the mall was to acclimatise you to being in public - but also a hook to intrigue / capture existing hidden latex lovers. We know they are out there and much more pliable that you will ever be.'  Perhaps their desires will allow us to…’

(could be more information, backstory then an explanation (thus an illustration) of what to do with Asudem. Being fitted into a dolls suit that removes all her humanity - an even barbie pink latex skin etc. One idea is to have a latex cast made of her face, mannequin style / doll makeup it then after full body tattoos of doll joints and detailing, the mask it put on…)

"she doesn't need to be embarrassed and forced into latex now does she? - she's already an addict and just needs some guidance and support to full-fill her desires and ours. Mind you ours are somewhat more permanent and extreme than she could ever be able to dream of.'  I mean cosmetic surgery is practically de rigour in some classes when the girls enter collage and every hipster town has a dozen tattoo parlours. Its so much easier now. She’ll be seduced by her wardrobe as its much more than she could ever afford. Perfect her flesh as the doll she is destined to be then seal her into latex.

"You were just a lure to bring people like here to us for acquisition and remake. Mistress Z already has eyes on her as her own private doll. As well as window display for her chic latex couture shop one her mask is in place. Don;t worry she'll share once she's suitable embraced her doll mind and we can always visit her in Mistress Z's boutique. Maybe we'll have you posing with her in the window some days or months…

(some sort of make over in image)
Posted by Asudem Latex at 8:30 AM