it only makes sense to me

that i'd submit to a mannequinised mistress. now posed at Club Circe 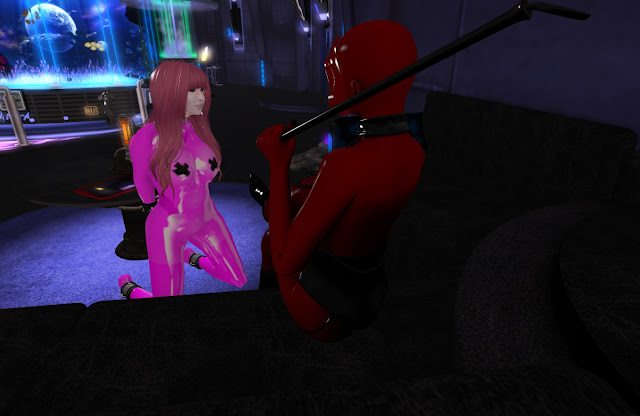 The figure clad head to toe in shiny crimson latex looks every inch the confident dominant as she sits on the couch in the club. She lounges feet up and riding crop ready as she gazes into the flickering flame of the gas lamp.

On closer inspection you realize that she doesn't move at all, doesn't make a sound, and the lenses are blank. It's a mannequin, just a fake that fooled you for a minute.

For now she still remembers the day she came to club and was fooled by the mannequin just like you were, how she told the owner that she wished she looked that good...if only she'd known.

Now she does look that good, exactly like that...she's trapped inside unable to speak or move, seeing people only dimly as she fools them until they realize what she is, a fake.

That's her name now, 'Fake', the only name she knows, and everyone can see that she's exactly that, a fake dominant, a fake mistress, looking the part but totally fake.

Why not take a selfie with her, it's not like she can object.

OOC
===
The person now only known as Fake (malon.sewell) is grabbed and imprisoned in the mannequin whenever she logs on. She'll always look the perfect rubber Mistress but she'll always be a fake for everyone to see. When she's not online her rubber mannequin prison sits waiting to recapture her.

Kumi
Posted by Asudem Latex at 6:04 AM

In this manner my acquaintance Wesley Virgin's tale begins with this SHOCKING AND CONTROVERSIAL video.

You see, Wesley was in the army-and shortly after leaving-he unveiled hidden, "self mind control" tactics that the CIA and others used to obtain whatever they want.

THESE are the exact same secrets tons of famous people (especially those who "come out of nowhere") and the greatest business people used to become wealthy and famous.

You probably know how you only use 10% of your brain.

Really, that's because most of your BRAINPOWER is UNCONSCIOUS.

Perhaps that thought has even taken place IN YOUR own head... as it did in my good friend Wesley Virgin's head around seven years ago, while driving an unregistered, beat-up trash bucket of a car with a suspended license and $3 on his bank card.

"I'm so fed up with going through life check to check! Why can't I become successful?"

You've been a part of those those thoughts, ain't it so?

Your own success story is going to be written. All you have to do is in YOURSELF.

I found this very interesting. I never been in SL sadly. But would like to try. I will not tell more, yet its something that goes very deep. Being a doll and possibly forever leave me light headed. Envious of Fake and her fate. Its...I cant even describe properly what sensations it awakens.
Would love to just meet you there and be able to visit the club to see for myself. If any help how to become a doll there...it would be kind.
Thank you for at least reading this.
Stay safe and well.