a talented reader from Russia 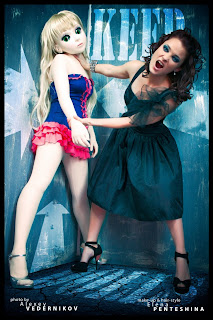 wrote me a few weeks ago to show off his amazing sculpted kigurumi doll heads. his most recent collection has resulted in these interesting photos. strangely thats the 2nd email conversation with a designer from Russia in as many weeks. more on that to come later. 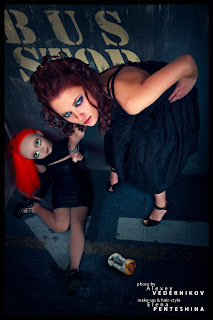 he creates the masks himself at his own workshop: Doll's Kingdom AG and they come with a wide range of options with a price tag of about 750 euros. currently there's no direct way to purchase them though he is working on an international site. i'll relay any enquiries too him directly or simply post comments and he'll respond. i'd imagine its likely to be safer than ordering from him rather than direct from Japan for some time. 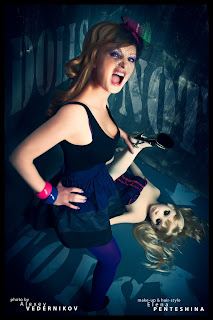 he also supplied a bonus photo of behind the scenes during the photo shoot and apparently the model stayed in costume for close to 8hrs during the shoot! 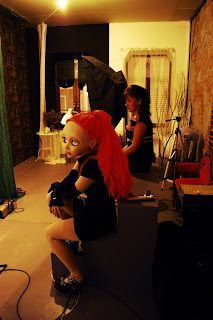 ...so this is just a very early stage beginnings of an idea here and he seems very keen - its just my funds are pretty low at the moment (i keep slpurging on shoes!!). its something i've been thinking about for some time which is to recreate my Second Life identity via a mask in real life - not only wearable but also lockable.

ps: here's his email address so you can contact him directly and please mention you saw it here: hikarinaka (at) mail.ru
Posted by Asudem Latex at 9:20 AM

And...Edo, it's good to see you back online. I was worried, even if you were halfway on the other side of Japan from the disaster area.

It's good knowing you're alive.

Thank you for being around.

thanks for the info, although if your working for that mask company then contact me directly as i'd be happy to have your advertisement in exchange for a mask...

Hi, check out this dude, his coplays are awesome !