special thanks to John (who I think is in the UK) for sending it in and then putting up with my editors comments. 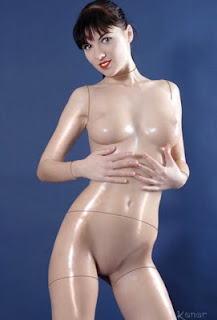 Alicia looked in the mirror "Oh almost there!" she told herself with a smile. It had been a long six months. The process was involved and complex but for her part it was relatively easy just without fail taking the cocktail of chemicals that would result in her permanent transformation.

Alicia remembered back to how she would cast envious eyes on the mannequins in the windows of department stores. "I want to be like them!" she'd whisper to herself. "I want to be perfect and beautiful forever!" she added.

"I can help you with that!" a voice responded. A woman stood next to her smiling.

Alicia observed her closely "You can do what?!" she asked a bit embarrassed as she blushed deeply.

She smiled at her without looking at Alicia like she was crazy "I can help you acheive your goal if you're really interested." She told her. "I can make you like her, perfect and beautiful not to mention ageless!" She added.

She shook her head and prepared to walk away as fast as she could. "Sorry, I don't believe you!" Alicia said curtly.

But there was something in this womans voice that kept Alicia from retreating. "Just have a cup of coffee and listen to my offer before you walk away." The stranger asked. Alicia followed her to a nearby cafe. This rather attractive brunette smiled at her warmly as they sipped their coffee's. Alicia admired her leather skirt and satiny blouse. "Allow me to introduce myself. I'm Darlene!" she smiled at Alicia brightly. "Now I'm totally serious about what I said! I can make you just like that girl in the window!" she told Alicia with a smile that could charm anyone.

"It's hard to believe!" Alicia responded with a grin brought on by Darlene's infectious smile. "I think I'd need some sort of proof!" Alicia added.

"Well follow me to my workshop and I can offer you the proof!" Darlene answered.

They both got up and left. Fortunately Darlene's workshop wasn't far. It was well within walking distance in fact. Alicia glanced over at Darlene and noticed how tall she was. Darlene was about 5'9" tall to Alicia's 5'7". Alicia noticed the supple grace of Darlene's gait. It was like a dancers married with a flexiblity of a contortionist. It was enticing! Alicia looked over her body and saw the smooth curves of her body leading to her full behind. She noticed Darlene's breasts as well and how the outline of her nipples pushed against the material of her blouse. Despite herself Alicia wanted to believe what this woman told her. She wanted to allow Darlene to mold her and remake her into a creature of perfection.

In front was a small dress shop with remarkbly realistic mannequins. They were beautiful. Alicia was again envious of the hollow plastic girls. Darlene led Alicia through the shop to a door. In they went to a larger space full of naked realistic female mannequins. Alicia felt a compulsion to disrobe and stand next to them.

Darlene walked over to one and began to slowly caress the nude mannequin. "This is my latest Jezebel. She too was skeptical but she came around and is now this lovely hollow fiberglass girl!" she smiled at Alicia. "I asked her to record her experiences so others can see what follows." Darlene put the cd into the player and turned on the television. Alicia watched as the living Jezebel smiled and began to speak.

Alicia watched as Jezebel explained the process. It would be daily doses of the serum given her by Darlene. Day by day she spoke telling of how she felt and how the chemicals made her feel. There were times when it made her violently ill. Jezebel explained that Darlene told her to only take a half dose on those days. Eventually Jezebel felt better and continued. Then excitedly she reported on the changes made to her body. How all the hair on her legs or her triangle had disappeared. Later she reported how her skin was becoming smooth and shiny. Jezebel was surprised and sometimes a little scared by what was happening but in the end happy. Alicia watched as the final moments took place with Jezebel standing stiffly the lines around her shoulders and waist becoming darker. The ones around her right leg forming and becoming more apparent as her face became rigid and as shiny as her body. Alicia watched amazed as Jezebel transformed into the form she currently now had in this back room.

Darlene stood to one side watching the expression on Alicia's face as she watched the video. "So what do you think now Alicia?" asked Darlene as she looked into Alicia's eyes.

Alicia's mind was whirling with the possibilities of what she'd seen. "I can be as I've always wished. I can be beautiful forever. I can be loved forever!" she thought joyfully. Another worry then came to mind "Is she still alive Darlene?" Alicia inquired excitedly.

"You can do that?" Alicia asked with a surprised grin.

"Yes, let me get what I need." Darlene told her. She produced a small bottle and then walked over to the mannequins she called Jezebel. Darlene the brushed a small amount of a clear liquid on the lips of the mannequin. "Give it a few moments." she smiled at Alicia.

Alicia watched as the plastic lips of the mannequin seemed to alter. They lost a bit of the gleam they had and began to move slowly. A soft moan issued forth from the mannequin. Darlene walked over and rubbed the breasts of the naked display form. The moan grew louder! Then to Alicia's amazement the hollow plastic woman spoke "Oh Mistress touch me again!" a soft but excited voice begged.

Darlene then began to rub the smooth triangle between the mannequins legs. A louder moan escaped from the lips of the living plastic girl. "Now Jezebel do you love being a mannequin? This young lady is wondering if she should join us as one such as you!" Darlene asked the frozen polymer beauty.

"Oh yes I do love it Mistress! She should become like us! I've no regrets now and I only wish to be the mannequin of my Mistress for as long as she'll have me...!" the lips then returned to thier glossy hue and resumed being nothing more than plastic.

"I think you should convince her Jezebel!" Darlene ordered.

The mannequin's form softened. The glossiness became subdued. The lines where her parts met grew fuzzy but remained to mark where she'd be seperated when she became fully a mannequin again. Jezebel smiled and looked over at Alicia. "Yes Mistress I'll do my best!" she told Darlene as she moved off her support rod. Darlene grinned as she quietly left the room.

Alicia's heart beat faster. She could feel her face flush as she saw this nude living mannequin walk over to her. Jezebel smiled "You want to be like me don't you honey?! I can't blame you no! The pleasure of a caress by my Mistress or anyone in fact is beyond your imagining!" Jezebel reached out and touched Alicia's cheek.

Alicia began to feel herself slowing down. It was like she was stiffening becoming a statue unable to move or speak as Jezebel made love to her. In a distant mirror she could see the two of them. One a living mannequin and the other a still glossy skinned Alicia. Alicia watched in wonder as she began to look more and more like a mannequin as Jezebel moved over her kissing and licking her body. she watched as Jezebel got down on her knees and pressed her lips and tongue against her rapidly shrinking vagina. As Jezebel used her mobile mouth on Alicia the space where Alicia's vagina was normally became as smooth as a mannequins.

It seemed like hours had past when some semblence of conciousness returned to a nude Alicia. She looked around the workshop and saw Jezebel again frozen and plastic mounted on her support rod. She gathered up her clothing and was just finished dressing when the door opened and Darlene walked in.

"It only lasts for a short time." Darlene smiled at Alicia. "Does that answer your question?" she asked Alicia.

The joy was clearly written on Alicia's face as she nodded "Yes, yes it does! When can I start?" she asked a bit impatiently.

Darlene smiled and went to a nearby table and produced a vial. "Tonight if you like. Drink this all down and return tomorrow for another. Soon in time you'll join Jezebel and I here as one of my mannequins!" she caressed Alicia's face.

Alicia stood gazing at the mirror only her hands and face lacking the glossiness of the plastic composition of the rest of her body. "This is the last one Darlene said. I'll swallow this and I'll be what I've always wanted forever. I'll be a possession of my Mistress forever! I'll be desired and loved forever! I'll be beautiful and ageless forever!" Alicia told herself as she brought the vial to her lips slowly as it was hard to move her almost mannequin arm. She swallowed and felt it begin to work. The vial slipped from her fingers as she assumed her final pose. The strange feeling of her body becoming hollow swept over her. Even as she froze she could see her hand become glossy plastic. She felt it happen to her face as well.

In moments Alicia the woman disappeared. A mannequin named Alica took her place.
Posted by Asudem Latex at 10:45 AM

I know, I've been taking a while...real life has a way of getting in my way, I'm sorry.

I will come up with something for my Yahoo Group, when I have the time to.

Really great effort! A compelling story and I like the idea that the transformation is permanent, but not permanent :)

I would love to see future stories with these characters especially exploring Alicia and her new life.

A very nice, short story!! I do love the fact the figures have a chance to experience pleasure, and are not just fibreglass objects.

I'm with cm3 in that I'd like to see either a longer version of this story (Alicia having to cut off contact with her family, her job and such) or another story in the series.