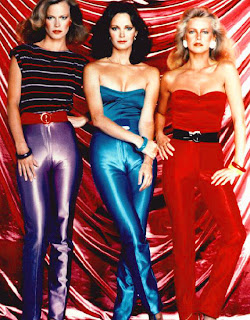 i spotted a black pair of spandex disco pants being worn over the weekend at the mall and a flood of memories came back. latex wasn't to be scene anywhere but super shine of the disco pants were. is that another catalyst to this fetish i am loosing myself too? 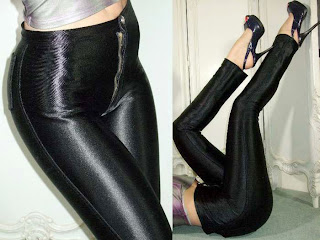 well there was the film Grease of course where Olivia Newton John was actually sewn into hers for the last part of the film. (that of course is another deep seated aspect to my fetish) The shine just danced around her long legs and curved bottom. white highlites all over her lower half. then there was the above Charlies Angels press shot. i had spotted it elsewhere and might well be one of my first 'fetish' photo's i can remember. thanks to the internet and other obsessives here it is for all you readers.

americal apparel are selling the disco pants again here and i am really considering buying a pair for myself at christmas. over 300 other customers are raving about them as you can see here. how much wearing i'll get out of them is another matter as i'm not a social butterfly otherwise i'd be a famous latex doll going to all the best fetish clubs around the world wouldn't i? 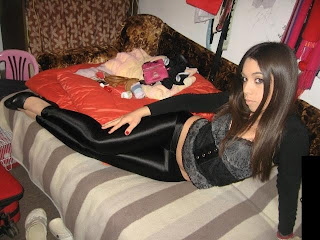 i'm guessing i'm not the the only one as i found without too much of a google three sites that also celebrate turning your lower half into extreme supergloss goodness: www.shiny-jeans.com and two blogs; the spandexstatement blog and more focussed spandex disco jeans blog. 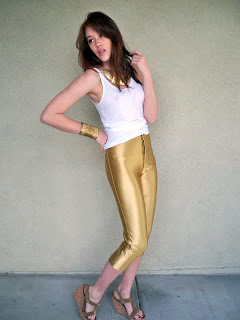 i'd be interested to know if other fetishists start this way. something visible and in fashion that slowly evolved into something much more?

what the photo's fail to really show - besides their obvious shinyness - it how the light really effects them as you move;

which you can get with latex, although it really needs the right kind of light to do so which explains why photo's taken outside really don't work. as Robert Palmer say's - black cars look better in the shade - as does all latex.

The nice thing about them being carried by American Apparel is that you can see them and try them on. I've seen them on the rack there and they are instantly recognizable.
They have AA locations in college towns and outlet plazas, so keep an eye out or use their store locator! We had to drive an hour to find ours, but found great leotards, tights, bodysuits, leggings and of course the jeans!!!

Fantastic stuff, I love the latex revival and long may it continue.

I have actually never been interested in latex while the disco jeans or disco pants depicted here have been a fetish for a long time. And now it has become fashion!!