tighter but not too tight 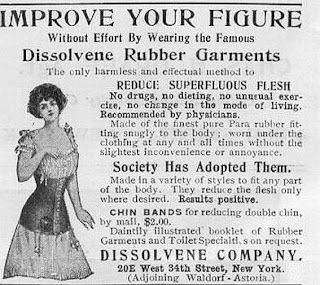 it could be a january thing, post Xmas obligatory diet or all just a coincidence really.

it starts off spotting and getting what i would call a 'fashion bondage belt' or cinche on sale in a mall. ok it was pretty cheap and i've never had one so i bought it for the few bucks it was. the exact design is its 3 inches wide and a section of the back is made of thick stretch material and the front part is wider leather with 3 buckles. wearing it as tight as i could of course with all the holes on the belt aspect used up; i quickly grew to like the feeling. the constant pressure did seem to help my tummy as it had something to strain against so some sort of constant muscle activity (guessing like those electric current device).

obviously its not a real corset by any stretch of the imagination although designed to look like one. i had to admit it did hold me in a bit. after a few days of constant wear which even btw included a nap i thought hmmm i think i need something like this which actually does more. so i started to look around and spotted a small add on fetlife for a British co with two that looked amazing. its 3 buckles and you can see it at Kink Accesories. on the verge of buying it with paypal i heard back about my size questions and it turns out too sadly these too were 'fashion' corsets / cinches that had no real waist tightening ability. 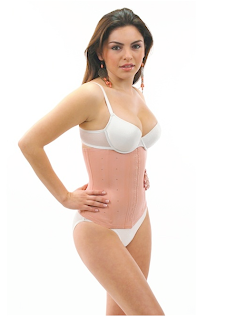 so further googling revealed a site on corsets and specifically old corsets and cinches. the article that caught my eye was Reducing Corset with all these old rubber adverts. however, scrolling down i discovered that there is a south american modern brand called Squeem.

starting a thread on fetlife's Corsets and Corsetry (you need to be registered to read it btw) there's still an on going debate about them so i'm still researching them before i start with one. feel free to chip in. 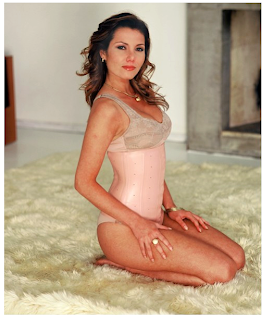 i'm still fascinated; literally rubber bondage undergarments going back to the 30's and still available in modern times. i can legitmetly wear something so kinky all day including business meeting/office work and not feel embarrassed of the fact.

soon i'll be on my way to a corseted waist and i feel it may prove to be as addictive to my latex and heel obsessions.

worth a lot of money now.

Got one for the SO exactly as shown from ebay I believe... She rarely wears it. But she's no perv.

I bought one as picured, pretty cool but didn't last long as it was probably a size too small. (making it great while it lasted)
All in all for the price not bad. Watch the sizing, they use a weird standard.

You can also get just a regular corset to train your waist. I highly recommend the work of Dark Garden.